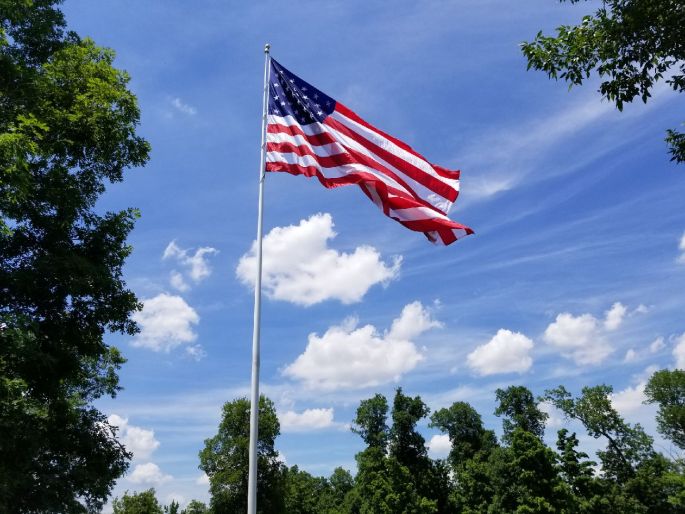 The Flag at Patriots Pointe

Why Did We Construct the Flag Monument?

In 2003, we purchased this home and the land that would eventually become Patriots Pointe, sitting high atop the bluff over-looking Rough River Lake.  We spent many hours thinking about what to name this new development and how to share this glorious place with Rough River Lake visitors and neighbors.

In 2003 the conflict in Iraq had begun, we had one son already deployed, 3 nephews in active service and 21 family members in total since WWII that have served our country (including Charlie).  As we pondered a name, we often thought of how their sacrifice and that of so many veterans before them, allowed us to freely enjoy this new home.  So, Patriots Pointe was named and the idea for the flag monument was born.  (At the time we didn’t intend it to be so big!)

In early 2005 when my father was losing his battle with bone cancer, he spoke proudly of his service as a Combat Engineer in the U.S. Army’s 95th Infantry Division under Gen. George S. Patton.  Towards the end, Dad talked of how sorry he was that he wouldn’t live to see the completion of our home at Patriots Pointe.  I told him not to worry, that we’d put up a flag so big he could see it from heaven.  I believe that he can!

When you see this flag, remember to THANK a service man or woman for their time and sacrifice.

We hope you enjoy our Pointe of view:)

How high does the flag pole rise above the ground?  100 feet.  The pole is 110’ long in total, welded onsite in 3 sections and was raised with a crane.  The flag is flying at approximately 900 ft. above sea level.

What supports it?  The pole sits in a steel cylinder that extends 12’ below ground.  The cylinder sits in 26 cubic yards of concrete.  The flag pole and foundation in total weigh approximately 55 tons.

What is it made of?  The pole is made of carbon steel and manufactured by Baartol Co. in Kenton, OH.  The flag was manufactured by Annin & Co., the oldest and largest manufacturer of flags in the United States.  (www.Annin.com)  Annin has made flags since the 1820’s in the U.S.

How much wind and it withstand?  The pole is rated for up to 110 mph sustained winds as mounted with the 30’ x 50’ flag.

How will it be flown?  In accordance with Federal guidelines.  As such, the flag will be at half-mast from sunrise until noon on Memorial Day and all day on Patriot's Day (September 11th).

The flag is flown at FULL mast all other days, unless the President of the United States calls for all flags to be flown at half-mast.

3)  The monument is illuminated at night with 4000 watts of light.

Email your comments to CharlieCorbett1@gmail.com  Thank you!